This cannot be answered without a rational discussion of the Holy Trinity. This theological topic, more than any other, confuses the heck out of serious and religious thinking people.

Orthodox Christianity describes the Holy Trinity as three divine persons. Although they attempt to recover and restore the notion of one God (Christianity is supposed to be monotheistic) by saying that the three divine Persons of Trinitarian doctrine consist of one unified substance, still, one is left with the notion that these three Gods could sit in three different chairs.

When I have pointed to the illogicality of such an ambiguous notion of God, its defenders (including those with Ph.Ds) say that it is a “Great Mystery” and warn me that my mind should not even be going into such directions.

Now that I have gotten that off my chest I can put my emotions aside and return to a more pragmatic discussion of this matter. When I say my prayers at night, I want to know exactly to whom I am addressing (and not have to guess whether I am focusing on the correct chair or the proper Deity).

I know that Jesus said that the only way to the Father was through Him (the Son) but then Jesus does an about face by teaching the Lord’s Prayer which completely bypasses the Son and allows us to pray directly to the Father.

So, with the Lord’s Prayer in hand, who needs Jesus?

But Orthodox Christianity, which embraces the sacred Trinity as three Persons, insists we are first to put our faith in Jesus. In this way the righteousness of the Son can be imputed to us humans by the Father, then the Holy Spirit shows up to set into motion the operation of justification, which magically wipes all our sins away, renews our spirit, and completes our salvation.

In other words, each Divine Person cannot claim to be fully God, as each does something that the other two don’t. If it takes three Persons to give us an omnipotent, omniscient and omnipresent God, well, to be frank, that is not my idea of monotheism.

I prefer Emanuel Swedenborg’s version of the Divine Trinity as ONE GOD manifesting three distinct operations and functions. The Father, Son, and Holy Spirit represent not three persons but the three operations of Divine Love, Divine Truth, and Divine Activity.

Truth makes love visible. That is why the Lord came into the world – to make the Love of the Father visible to us by taking on a human form. Jesus is Jehovah!

One might wonder how God could take on an imperfect and gross human body. According to Swedenborg, that was God’s precise strategy for salvation. The purpose of coming into the world was to make His human form perfectly divine by doing the will of the Father (the Father was His Divine Soul) and combating the worldly desires of the flesh and worldly temptations.

Why did God have to implore such a strategy instead of fighting evil straight on?

Without taking on a human body an Infinite God cannot be realistically attacked by any evil. A human body provided the medium by which the Lord was vulnerable to attack by both people on earth and by the entire powers of hell. The appearance of the Holy Spirit (as a dove) when Jesus was baptized was a sign from heaven that the operation of harmonizing his human side by means of the higher influence of His Divine Nature was about to begin.

This process of overcoming the flesh and its proclivities (especially love of self and the world) involved profound humiliation before the Father (which represented His Divine Spirit and its ultimate dictates).

The Lord’s biggest challenge on the cross was not enduring physical pain or physical death but His not giving in to the human part of His nature – which tempted Him to get off the cross as a show of absolute strength to men and women and compel belief. By resisting this final temptation and achieving profound humility He united His human nature with the Divine Nature and made them one (the Alpha and Omega). What died on the cross were all His human imperfections.

This complete victory over the flesh gave the Lord full power over hell, which was increasing its deadly influence in the world at the time of His Advent. We were not saved by this event but the door to salvation was kept open. When we approach the Lord to change our lives His Divine Heavenly Spirit (not a dove) starts a similar process of renewal and regeneration within us. The Lord will help us combat our negative nature and find true humility.

If God chose to sit in three chairs we would see the same person (the Lord) on all three.

How does that sit with you? Did I pull a chair right out from under your faith-system?

The greatest symbol of LOVE is NEVER the HEART…

Because the heart STOPS BEATING…

But the MAN on the Cross NEVER STOP LOVING…

love all…… is true love for Jesus … 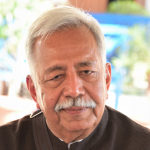