All conjunction in the spiritual world is effected by means of looking [*by intent regard]. When any one there is thinking about another from a desire to speak with him, the other immediately becomes present, and they see each other face to face. It is the same when any one is thinking about another from an affection of love; but this affection produces conjunction, while the other produces presence only. This is peculiar to the spiritual world, for the reason that all there are spiritual beings; in the natural world, in which all are material beings, it is otherwise.

This has been said to make known how the conjunction of the Lord with angels is effected, and how the apparent reciprocal conjunction of angels with the Lord is effected. For all angels turn their faces to the Lord, and the Lord’s look is upon the forehead, because the forehead corresponds to love and its affections, while angels behold the Lord with the eyes, because the eyes correspond to wisdom and its perceptions. Nevertheless angels do not, from themselves, turn their faces to the Lord, but the Lord turns them to Himself; and He turns them by influx into their life’s love, and through that love enters into the perceptions and thoughts; and thus He turns them about.

Such a circle of love to thoughts and from thoughts to love from love, is in all things of the human mind. This circle may be called the circle of life. About this something may be seen in the work on The Divine Love and the Divine Wisdom, as the following:

Angels constantly turn their faces to the Lord as a sun. All the interior things of the angels, both of mind and of body, are likewise turned to the Lord as a sun. Every spirit, of whatever quality, turns himself likewise to his ruling love. Love conjoins itself to wisdom, and causes wisdom to be reciprocally conjoined with it. Angels are in the Lord, and the Lord is in them; and because angels are recipients the Lord alone is heaven.

The Lord’s heaven in the natural world is called the church; and an angel of that heaven is a man of the church who is conjoined with the Lord, and who becomes an angel of the spiritual heaven after he leaves this world. From this it is clear that what has been said of the angelic heaven applies equally to the human heaven that is called the church. That reciprocal conjunction with the Lord which makes heaven in man is revealed by the Lord in these words:- 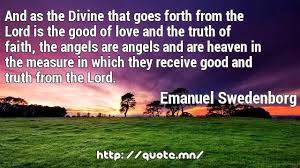 2 thoughts on “Conjunction of the Lord with Angels”