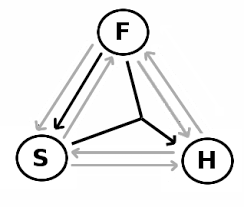 Jesus is clearly identified in the Gospels as the son of God, and during his ministry regularly referred to “the Father”, seemingly as a separate, higher being. Yet he also stated his own divinity, which was reinforced when he was resurrected after the crucifixion and appeared, in the flesh, to his followers.

So was he God? What about the Father? Could he and the Father both be God? And what about the Holy Spirit, also mentioned with great frequency? Was that a third divine being?

This seeming paradox led to a variety of interpretations among early Christians, which led to a council of 300 church leaders in the Turkish town of Nicaea in 325 A.D. They settled on the idea of three beings making up one God, an idea which was confirmed and expanded in a second council in Constantinople in 381 A.D. The doctrine took final form in what’s known as the Athanasian Creed, adopted by the Roman Catholic Church in the sixth century.

That creed, which is still central to most Christian churches today, says that the three – Father, Son and Holy Spirit – are equally God and equally all-powerful, and that all three existed from eternity and will exist to eternity. It says the Son was “begotten” of the Father and the Holy Spirit “proceeded” from the Father and the Son, but all three are “uncreated,” are equal, and are together one God in the Holy Trinity.

The Writings say this false doctrine was the beginning of the end for the Christian church, leading to an inevitable belief in three gods, even when people spoke of one God. They also say that three separate infinite beings would be impossible, since something that’s infinite cannot be divided.

Instead, the Writings say that God the Father – Jehovah, as He is known in the Old Testament – planted His own essence in Mary so that it could be clothed with a physical human body. Through Mary the resulting man – Jesus – also inherited all the typical human weaknesses and desires for evil, which meant that despite his divine soul He could lust for evil as powerfully as anyone ever has.

That human frailty allowed Jesus to engage directly in battle against the hells, which had at the time grown so powerful that people were nearly cut off from heaven. Those battles were waged the same way our battles are waged: through temptation. The Writings say Jesus subjected Himself to temptation throughout His life, on a scale and to a degree that we can’t imagine. But as He won each battle, he forced another part of hell into submission.

Those battles had another effect. With each victory, Jesus turned a little bit of His human reality into divine reality, slowly uniting his human exterior with His internal soul, which was Jehovah Himself. By the time of His ministry, what people saw was mostly divine. Through His final temptation, on the cross, he purified the final aspects of his physical humanity, so the body that was buried and resurrected was fully divine – Jesus was Jehovah and Jehovah was Jesus. And since He took that divine human body with Him to heaven, Jesus is till Jehovah and Jehovah is still Jesus, which is expressed in the Writings as the Lord.

As for the Holy Spirit, the case is this:

The Lord has always offered people spiritual guidance, but originally did so from a distance. The earliest people learned of the Lord through angels, and by seeing spiritual meaning in the natural world. Later the Lord used inspired people – Moses and various judges and prophets – to teach others about spiritual things. This changed, however, when He came among us as Jesus. As Jesus He spoke to people directly, teaching them Himself about spiritual things, teachings that were recorded and passed on to us today. The term “the Holy Spirit” describes the power of that direct teaching and the way the Lord uses it to motivate us.

The Holy Spirit, then, draws its power from things that have always been true, but it’s a power that came into effect through Jesus. That’s why it’s an expression that does not ever occur in the Old Testament, which instead speaks of the Spirit of Jehovah or the Spirit of the Lord.

So what does the Trinity mean to us now? What is the presence of the Father, Son and Holy Spirit in our lives? The Writings say that the three aspects of the Lord do indeed exist, but rather than being three people they are the soul of the Lord (the Father), the body of the Lord (the son) and the Lord’s activity (the Holy Spirit).

Here is a reference to a key passage in Swedenborg’s work, True Christian Religion 163.