When the Lord speaks to us in His Word, infinite Divine truths are expressed in human terms that our simple brains can comprehend. The fact is that infinite truth can only be expressed to finite minds through analogy, comparisons,metaphors and parables. We cannot understand the infinite as it is in itself, but we can compare and contrast the infinite with finite things, seeing a reflection or image of the infinite in the allegories.

Does that mean that we can’t trust what the Bible says? No. We can trust the Bible. We can trust the Lord’s Word to reveal deep truths that will bring us closer to the Lord and closer to one another, but we don’t see those truths by staying on the surface. If you get a can of food from the store, it will have a label saying “peaches,” or “corn.” Most likely there will be a matching picture of peaches or corn on the label. Before you eat, you will have to open the can and take out the nourishment inside. The words and pictures are true because they correspond to what is inside, but if you never open up the can, or still worse if you open the can and keep it, throwing away the food, you will never get real nourishment from it, and the labels themselves become useless.

Scripture Points to Its Own Deeper Meaning

“Beginning at Moses and all the Prophets, He expounded to them in all the Scriptures the things concerning Himself” (Luke 24:27)

“He opened their understanding that they might comprehend the Scriptures” (Luke 24:45)

Furthermore, Jesus’ own words were symbolic. He told so many parables that it says “He didn’t speak to the people without a parable” (Matthew 13:34, Mark 4:34). Even alone with His disciples He said, “These things I have spoken to you in figurative language; but the time is coming when I will no longer speak to you in figurative language, but I will tell you plainly about the Father” (John 16:25).

Paul, too, warned us not to take everything literally: “We should serve in the newness of the Spirit and not in the oldness of the letter” (Romans 7:6). “The letter kills, but the spirit gives life” (2 Corinthians 3:6). Early Christians learned that many of the earthly things described in the Old Testament were a “copy and shadow of heavenly things…symbolic for the present time” (Hebrews 8:5, 9:9, Colossians 2:16, 17).

We can see that there are many, many statements in the Bible itself that direct us to look for a deeper meaning. And on the other side, there is not a single passage anywhere in the Bible that directs us to take everything literally. There is nothing on the box that says, “Do not Open.”

There are many stories that are made up in order to teach a deeper truth. The many parables in the Bible are examples. We find further familiar examples in Aesop’s fables. No one imagines that the Tortoise and Hare were literal animals that talked and raced against each other. They obviously represent types of people, or attitudes that people have. The story is not literally true, but conveys an essential truth: “Slow and steady wins the race.”

In the parable of Adam and Eve it is not a tortoise or hare that talks but a snake. Though the story says that the snake was just a beast of the field, no one takes this literally. Anyone can see that the snake was not a literal snake but a symbol of the devil, a personification of evil itself.

Another made up story is Pilgrim’s progress, a story about a man who happened to be named “Christian,” who has friends named “Pliable” and “Obstinate” and is on a journey from his hometown the “City of Destruction” through the “Slough of Despond” to the “Celestial City.” With names like these no one would suppose that it to be a literal story about an actual individual. It is clearly intended as a symbolic story about anyone who might happen to be a Christian.

Again, the ancient Greek myth about the love between Cupid and Psyche was never intended to be taken literally. Cupid means “Desire.” Even today Cupid is a common symbol of love. And Psyche means “Mind,” as in psychology. Cupid or Desire loves Psyche (Mind) but remains invisible to her. Only after going through many challenges can Mind be be married to Desire, and have a daughter named Pleasure (“Voluptas”). No one thinks these were literal people. In ancient times virtually all writing about deeper things was done through symbolic stories such as these.

“The Lord’s Divine Providence is present within the smallest details of a person’s life.” 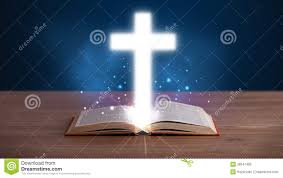 4 thoughts on “Can we believe the Bible?”