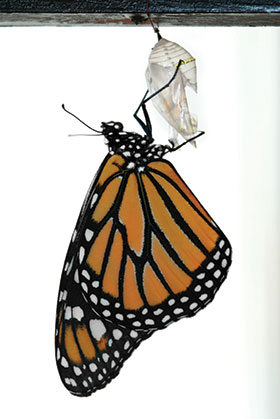 Is it easy or hard to make changes? It’s both, of course. Sometimes the hardest changes are the best and most rewarding. I have a simple saying when attempting to make a difficult but important change: “It may not be easy, but it will be worthwhile.” One of my favorite teachings of the New Church supports this: “Nothing whatever takes place, not even the smallest thing, except in order that good may come out of it” (Secrets of Heaven 6574). The Lord wants us to change for goodness’ sake. He wants the best for us. As He tells us in Jeremiah, He has plans for us, “For peace and not for evil, to give you a future and a hope” (29:11).

Our efforts to change can be easier using a step-by-step method. So many things go on behind the scenes—details we don’t easily see, schedule, or monitor such as unconscious attitudes, feelings and influences. Fortunately, the Lord is overseeing the whole intricate process, but we need to do our part. He invites us to take initiative and use our freedom, rationality and talents to make changes. For me, it helps to have an overarching, systematic plan to follow.

I live in Motor City, where the auto industry pioneered systems for step-by-step change. Think of the complexity of an automobile assembly line, bringing together thousands of unique parts in order to manufacture a fully functioning car. When the steps of the whole procedure are clearly defined, all the people and aspects of the system can work together toward the common goal.

Current self-help literature overflows with suggestions about the number of steps of change and what they involve. Some experts recommend as few as three steps. Others identify more details, such as the famous twelve steps of Alcoholics Anonymous. One model I’ve used extensively in my counseling practice comes from a book called Changing for Good by Prochaska, Norcross and DiClemente. Based on a large study conducted in the 1990s, the results outline a framework of six stages, each with its defining attitude.

As you read the chart below, which stage and attitude applies to you?

Each stage of change has its unique qualities and opportunities. They apply to all sorts of situations and to people of all ages. And at any given point in life, you could be at a different state in the process of working on various changes.

Now look at the following chart showing the steps of repentance as identified in the New Church teachings of True Christianity 530. I’ve added my own interpretation of the defining attitudes that go with them.

As a counselor, I love seeing the relationship between these two models. Both address similar concepts in the essential human process of change. Taken together, they form a framework for making effective and lasting change.

It’s common to have anxiety about change. You might think, “Nothing will change,” “Things may get worse,” “Change won’t last,” or a thousand other pesky ideas. A simple set of steps can provide perspective, reduce these fears, and increase the sense of motivation to pursue healthy change.

The Lord really wants you to experience positive and lasting change, and He will help all the way. He’s working behind the scenes, “always present with everyone, urging and pressing to be received” (True Christianity 766). Whatever you receive from His love and wisdom can be used to make significant improvements. If you follow the steps He wants you to take, you will see improvements in various areas of your life. So don’t fear. Trust His constant presence and leadership, His oversight of the intricate details of life. Then take the steps of change toward greater happiness and peace.

Read an example of blending the two plans for change

By Rev. Nathan Gladish, assistant pastor of Oak Arbor Church and principal of Oak Arbor School in Rochester, MI. He is also a licensed counselor.

“All the happiness angels have is found in service, derives from service, and is proportional to service.”

2 thoughts on “Changing for goodness’ sake”