Many biblical passages are sometimes cited to support the common idea that the image of the cross refers solely to Jesus’ death on the cross and that this event took away our sins.

In Matthew, an angel appears to Joseph and tells him he must name the baby in Mary’s womb Jesus “for He will save His people from their sins” (1:21). In John 1:29, John the Baptist sees Jesus and exclaims, “Behold! The Lamb of God who takes away the sin of the world.” In John 3, Jesus likens Himself to the brass serpent that Moses lifted up in the wilderness which cured anyone who looked at it: “As Moses lifted up the serpent in the wilderness, even so must the Son of Man be lifted up” (John 3:14). He goes on to say, “God so loved the world that He gave His only begotten Son, that whoever believes in Him should not perish but have everlasting life” (3:16). Some could interpret these and other passages to mean that Jesus took away our sins through His death on the cross. 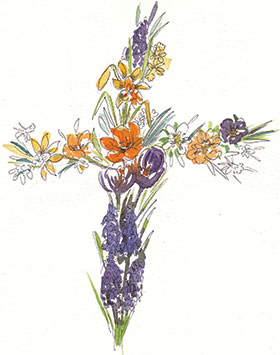 But in actuality, Scripture speaks of more than one type of cross. In Luke 9:22, Jesus tells His disciples what’s going to happen to Him at the end of His life: “The Son of Man must suffer many things,…and be killed, and be raised the third day.” Note that he says “killed,” not crucified. Jesus continues, “If anyone desires to come after Me, let him deny himself, and take up his cross daily, and follow Me” (9:23).

This interaction took place before Jesus’ death and resurrection. In this conversation, Jesus never told His disciples He was going to be crucified. Crucifixion was reserved for only the worst criminals. There is not a chance the disciples would believe that Jesus was going to be crucified. So what is this cross? Jesus invites us to follow Him in bearing it. He must not be referring to a physical cross, because the disciples had never seen him carrying one. And Jesus says we are to take up our cross daily. How many times can you be crucified physically? Not more than once. So what does it mean to take up our cross daily?

We must allow for two crosses: the physical cross that Jesus died on at the end of His life and some nonphysical “cross” that Jesus was already bearing every day when He made the statement in Luke, and which He invites us to bear as well.

How are we to bear our cross?

Paul says in Galatians, “Walk in the Spirit, and you shall not fulfill the lust of the flesh. For the flesh lusts against the Spirit, and the Spirit against the flesh; and these are contrary to one another…. Those who practice [the works of the flesh] will not inherit the kingdom of God…. [While] those who are Christ’s have crucified the flesh with its passions and desires” (Galatians 5:16, 17, 21, 24). This passage is talking about crucifixion not as a physical thing but as a spiritual thing, and not as something that Jesus alone went through, but something we have to go through if we are to follow Him. Bearing the cross is the pain of dealing with the burden of our lower nature and warring against its passions. We need Jesus, because we have no power against hell on our own. And yet we have to repent and cooperate in bringing our lower nature into order. That we can do daily.

Jesus’ death was not about redemption; rather, it was His life that redeemed us. Jesus makes this clear when He tells the Pharisees in Luke 13:32, “Behold, I cast out demons and perform cures today and tomorrow, and the third day I shall be perfected.” The time when he was casting out demons (meaning conquering sin) and performing cures was “today and tomorrow,” meaning during His life; His death, meant by the “third day,” was not about casting out demons; that was a process through which He was perfected and became fully Divine.

In John, Jesus prays to the Father saying He has “finished the work” the Father gave Him to do (17:4). He’s not dead yet, and yet He says He’s finished His work. Redemption is the work that He had finished, that He accomplished during His life. His work of redemption was conquering the hells through bearing His spiritual cross. It was the inner work He did every day of His life. This work gave Jesus the power to take away the sins of the world. We draw on that power when we practice repentance. By a life of repentance we take up our cross daily and follow the Lord.

The Rev. Dr. Jonathan Rose is a minister in Bryn Athyn, PA. He is the series editor and a translator for the New Century Edition of the Theological Works of Emanuel Swedenborg. For more information: jsrose@digitalwave.com.

2 thoughts on “What does it mean to ‘take up our cross daily’?”